There exist many GUI development technologies. They come packed with various concepts and abstractions that are intended to help in composing GUIs easily. But these concepts and abstractions are very coarse grain. To achieve something fine grain with them, we have to have complicated workarounds, such as adding implementations done with procedural code like C++, Java or JavaScript. This makes the GUI implementations hard to maintain and understand.

As a solution to this problem, we introduce the new declarative language ‘CGui’ that utilises low level non-linear constraints as the basis of specifying the GUI. CGui provides fine grained control over the GUI while making implementations significantly concise and simple. It comes with a sophisticated development environment that is capable of rendering an interactive preview of the GUI in real time along with dynamic and static analysis for the implementations. According to the evaluation results, CGui language along with its development environment was found to be more effective as well as productive when developing customised GUI elements compared to existing GUI technologies.

CGui is supports developing a complex GUI as a set of reusable module hierarchy.

CGui IDE supports the GUI developers to identify issues very easily in early stages. The interactive live preview gives an immediate feedback to the developers as they make changes.

What is special about CGui IDE?

Following two GUI widgets were developed in HTML5, Java and CGui with 7 Html5 and 6 Java developers. First GUI is a working analog clock. Second one is a range slider.

CGui Compared to Java and Html5 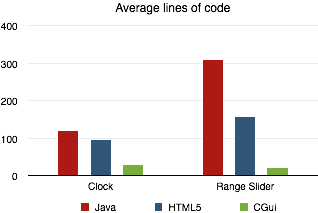 Time Spent for the Development 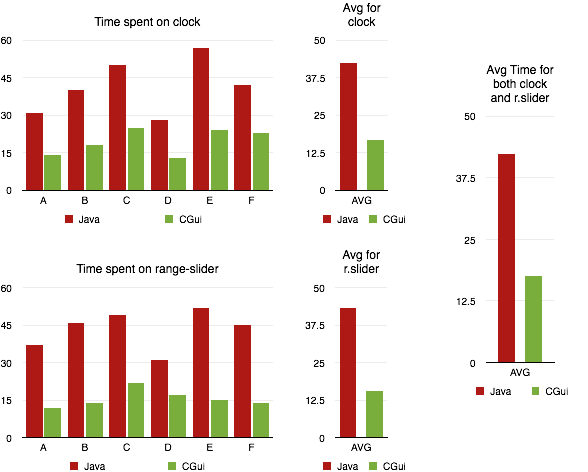 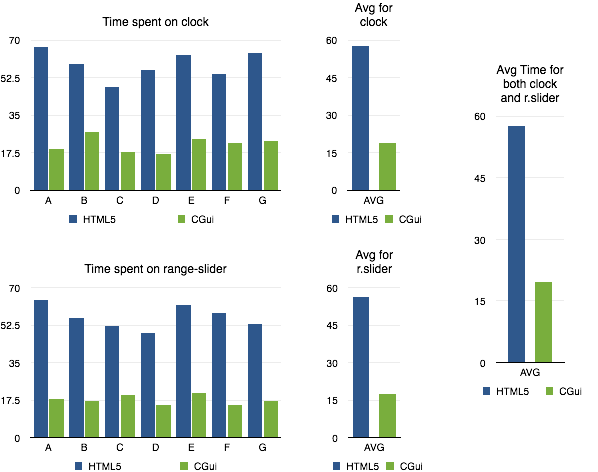 As we can see, CGui is capable of significantly improving the GUI development productivity in terms of lines of code and the time spent for the development.

Deliverable of the project